How to create a nonprofit organizational chart

Non-profit org charts also referred to as pyramid charts, help companies envision management by explaining their workers' positions, interactions, and levels. These maps have been used primarily by HR to record vacancies and decide whether to recruit or change roles. Instead of living-and-breathing tools, they became mostly stagnant and overlooked and used as historical records.

Why is a non-profit Org chart essential?

By placing faces to identities and positions in org charts will serve as a lifeline to new workers. They will help workers who wish to improve the flow of decision-making within the business and what to do to facilitate it.

Most notably, non-profit organizational charts would enable management and recruitment personnel to see growing divisions have space to expand and which ones are overwhelmed. A clear picture can help the team connect more internally, recognize who controls which projects, and help executives prepare for development and change. 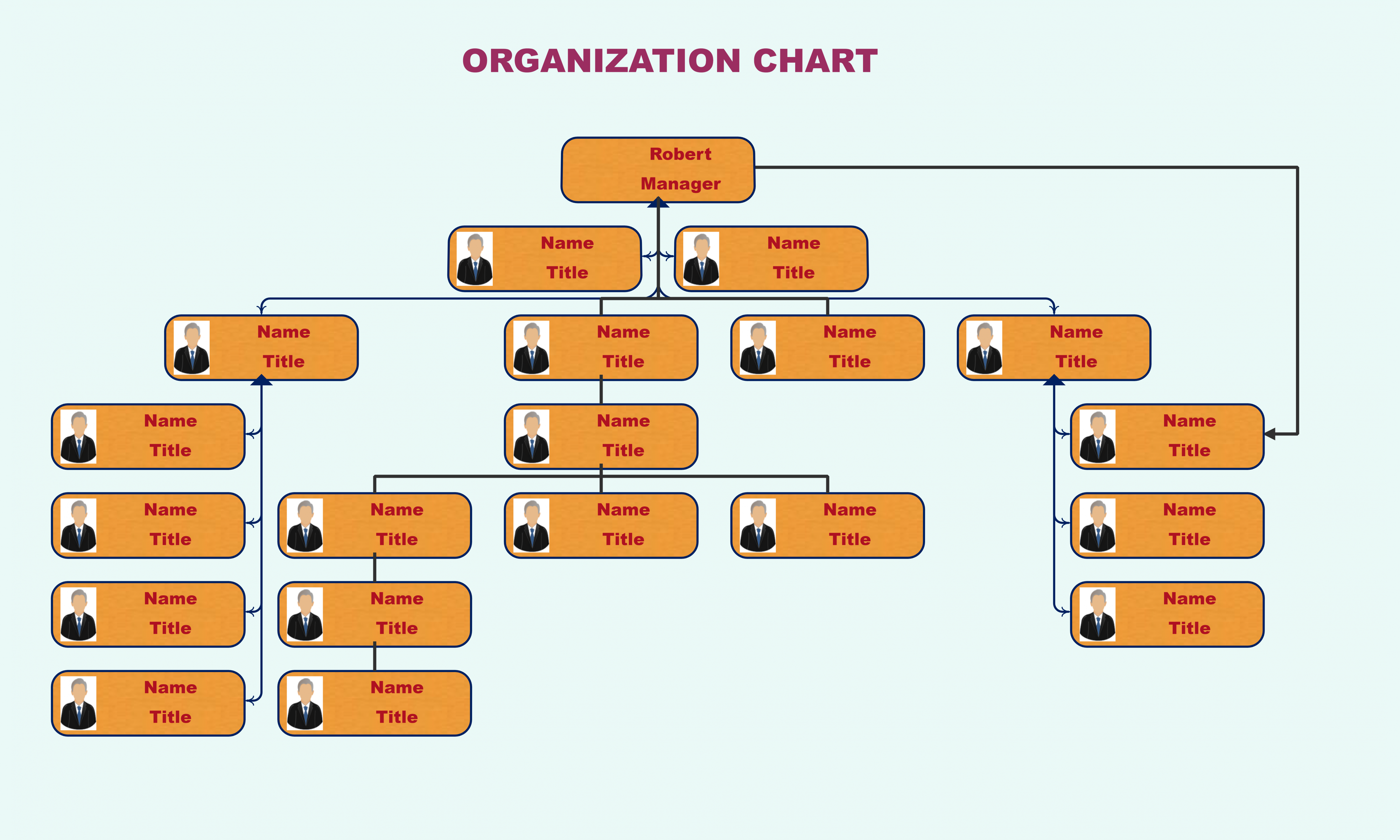 The top-down hierarchical map represents the conventional corporate structure. The C-Suite at the bottom is seen by this framework, preceded by other top leadership, office workers, and so on.

The system is split into typical divisions focused on everyone's available position in the company, such as IT, communications, financial management, human resources, and operations. Employees with the right expertise and specializations are paired together under such a hierarchical framework. They also suffer, however, from low exposure and contact with other agencies.

It is easier to find any failure points in the corporation project execution in Top-down Organization chart. However, a downside to this technique is that the organization cannot incorporate or benefit from the reduced ranks of its workers' expertise and experience. 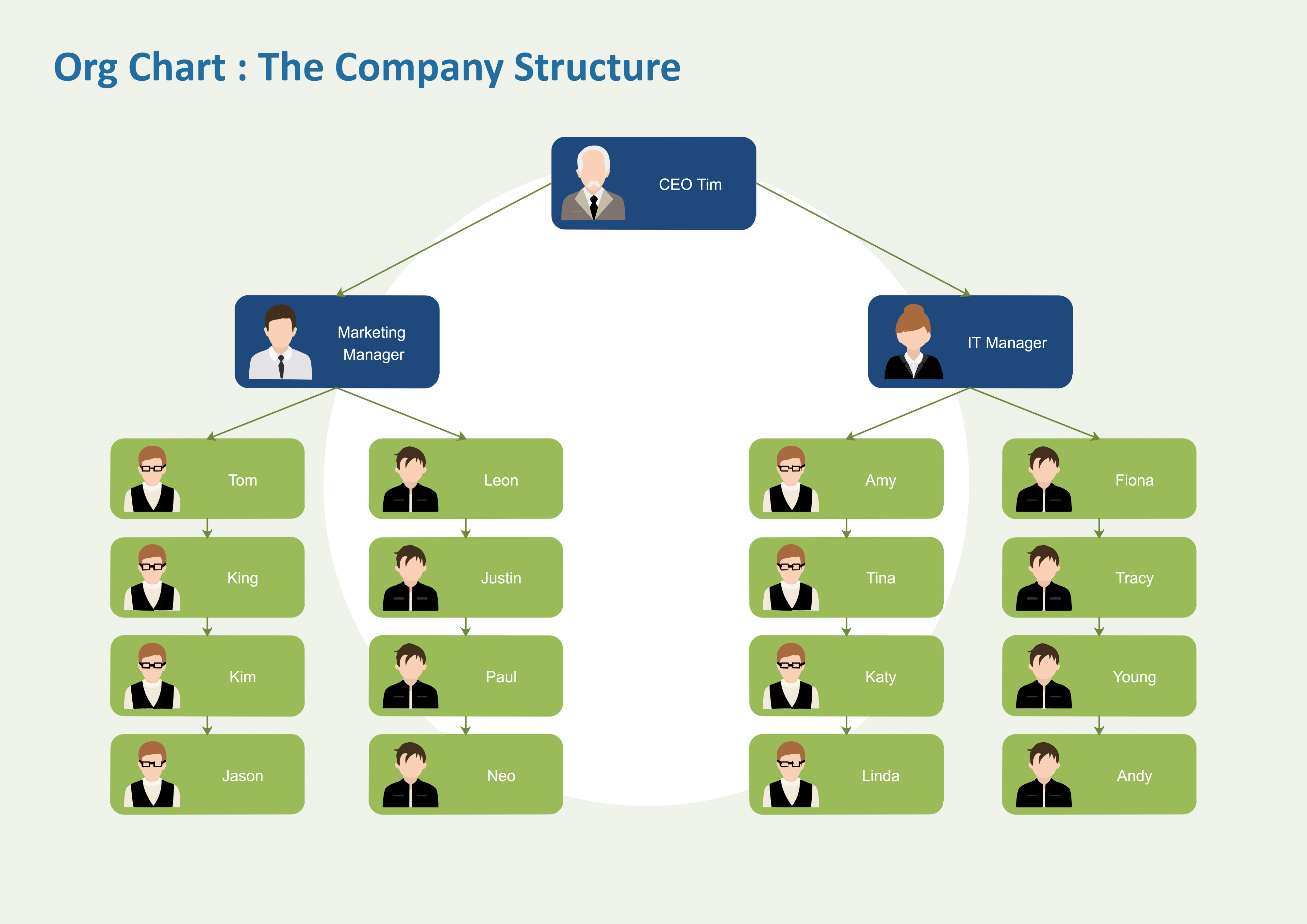 The functional layout is a very typical organizational structure practiced by many corporations. It is meant to separate individuals according to the specializations and roles of people in the enterprise into divisions.

As a department manager approved to be entirely accountable for the department's activities such as recruitment, assignment distribution, and promotions, persons with rich expertise and career will be hired. Each department has its role and remains separate, and it is assumed that a functional manager will report to the top manager.

Typically, there is no project manager in this hierarchical framework, though other organizational maps include project managers. The functional org chart is appropriate for enterprises with regular processes and standard practices such as production and industrial sectors. 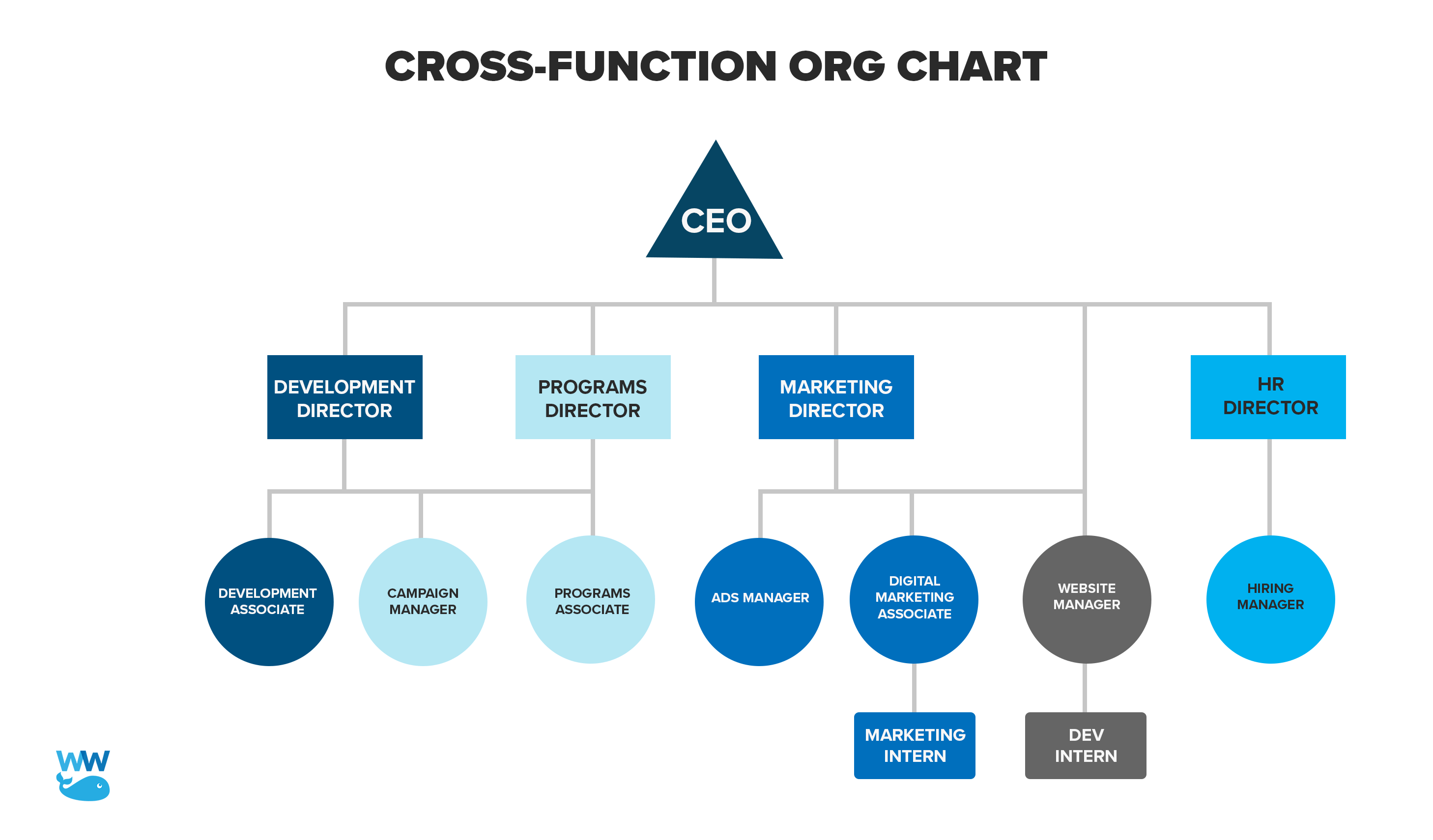 There might be entities in small teams or divisions that fall into specific units or have various reporting lines. This is why you can use a cross-functional org map reflecting mission reporting relationships about supervisory or top-down roles. In other terms, you will see someone who's the overall manager and who oversees them on individual departmental tasks.

Cross-functional teams put together staff from various divisions to achieve a shared purpose. Team members can come from fields that are as diverse as science, distribution, and marketing. Some participants may exhibit exceptional or uncommon abilities; cross-functional teams often recruit team members from multiple management layers. Inside the squad, in the organizational structure, these members can seem to have obligations than their usual amount.

These groups are less than entirely stable in most situations. Although they can last for years in some cases, in general, the theory is that after the target is accomplished, the team will either dissolve or re-form in search of a new goal of changed composition.

The precise framework of a non-profit organization relies partially on where it is located – certain jurisdictions have their criteria for the board of directors or other officials of the non-profit.

The concept of a non-profit, though, is typically similar worldwide. Based on the purpose and aims of the non-profit, the framework is broken into three functional departments: governance, programs, and management, and then further divided up within each region.

Non-profits Board of Directors shall regulate non-profits. The board of directors will range in size from three to more than 50. Every state has laws that set the system's elemental composition; however, based on the entity's needs, the team's actual design and the number of times it serves each year shifts from one organization to the other.

The administration is made up of managers who supervise all services. Non-profit management generally requires a managing officer, or chief, and office staff. It is the chief executive's responsibility to cooperate with the committee, follow out their orders, and supervise the staff who manage the non-profit services.

Most non-profits are created to conduct certain particular forms of work, such as managing a treatment center or collecting underdeveloped nations' donations to provide safe drinking water. To carry out this function and accomplish its aims, the agency is organized into separate program fields. Each section of the plan can then have its head of staff or assistant director. Fund-raising, logistics, growth, human resources, community coordinator, promotion, advertising, and preparation can be traditional program areas. The project leaders refer to the managing director and can have any number of workers under them.

Usually, non-profits have many forms of fields of administration that do not appear in for-profit enterprises. These could include fundraising and policy development, public policy, and charitable services.

The executive director, or an entire department, led by an organizational administrative, can manage some of these fields, such as fundraising. Some non-profit organizations will also have a service director or assistant director responsible for ensuring that the company follows the legal standards laid out in the regulations and liaises with the local community.

How to Create a Non-profit Org Chart?

If you are worried about creating a non-profit organizational chart for your corporation, don't worry anymore because here is the solution to your problem. Mindmaster provides multiple online templates to create your non-profit org chart. It is easy to use and a top choice for the corporation from all around the globe.

We have already commented on your non-profit org map's necessary details that you would need to include. We suggest using color labeling and assorted forms to explain divisions and functions, strengthening hierarchy and teams. To create your org chart more valuable to your staff, some other details you may include:

• Location in case of a remote workforce

This information will help the workers realize what is required of them at their current positions and have clear expectations for those who wish to step up. If workers feel that a company has a straightforward and attainable direction, they are more likely to remain on board.

How to create a life map (With examples)

Understanding the Primary Vs. Secondary Markets with Mind Maps

Learn how to use EdrawMind - a powerful collaborative mind mapping and brainstorming tool
LEARN MORE
Popular Now
How to Brainstorm: 7 Techniques to Generate More Ideas
12 Meeting Rules to Conduct Effective Meetings
Complete Beginner's Guide to Project Planning
How to Motivate Yourself to Work
How to Use Mind Map for Programming
How to Motivate Yourself to Study
How to Structure Your Storytelling with Mind Maps?
How to Conduct a Competitive Product Analysis