Join 2023 Edraw Special Sales. Get 22% Off before it's gone >>
Solar System Planets - Everything in a Mind Map
Create Your Mind Map Now

Solar System Planets - Everything in a Mind Map

How well do you know about the solar system? We bet you would either skip a planet or forget the right sequence. And with each having its characteristic features, it’s challenging to keep everything in mind. Geography students are often the worst sufferers. But not anymore. If you are having a tough time memorizing the same, we bring to you mind maps. Not only would the same created through EdrawMind help you learn all about our vast solar system but also assist you in processing the information and remember it. Ready, are you? Let’s go ahead and recapitulate all the planets in our solar system.

What is the Solar System?

The Solar System is the sphere of the galaxy, which is outlined by the Sun and all the objects that orbit around it. It is believed by scientists that the solar system was formed as a result of the gravitational collapse of a massive molecular cloud, about 4.6 billion years back, it’s a system traced in the outer spiral arm of our magnificent Milky Way. It is where life begins. Therefore this is elementary knowledge for humans.

What are the Components of the Solar System?

The solar system is something that sparks interest as soon as one mentions it or comes across the same in a publication. The following are the five major components comprising it.

It is the basic outline of things that we Earthlings have found out. Scientists believe there are many more things out there yet to be discovered, and the things that were found but still need to be given a name.

Solar System Planets - Everything in a Mind Map

The planetary system within a Solar System is the most significant component that most of us know of. It is made up of the largest planets, 8 or 9 in number. Here is a list of the 9 planets that scientists have yet discovered :

For a long time, scientists considered that there are to be 8 planets, including the Earth, along with smaller objects, i.e., their moons, dwarf planets, and other bodies like meteorites, asteroids, and comets, bound together by gravity. However, in the late 1990s, a dwarf planet, Pluto, was included within the order as the 9th planet. Even now, some scientists are considering the potential of having up to 11 planets out there.

The planetary system is deeply rooted in human civilization since ancient times, and vastly impacts our religious beliefs, mythology, culture and even impacts specific scientific applications like Planetary Astrology.

1. The Biggest Planet in The Solar System 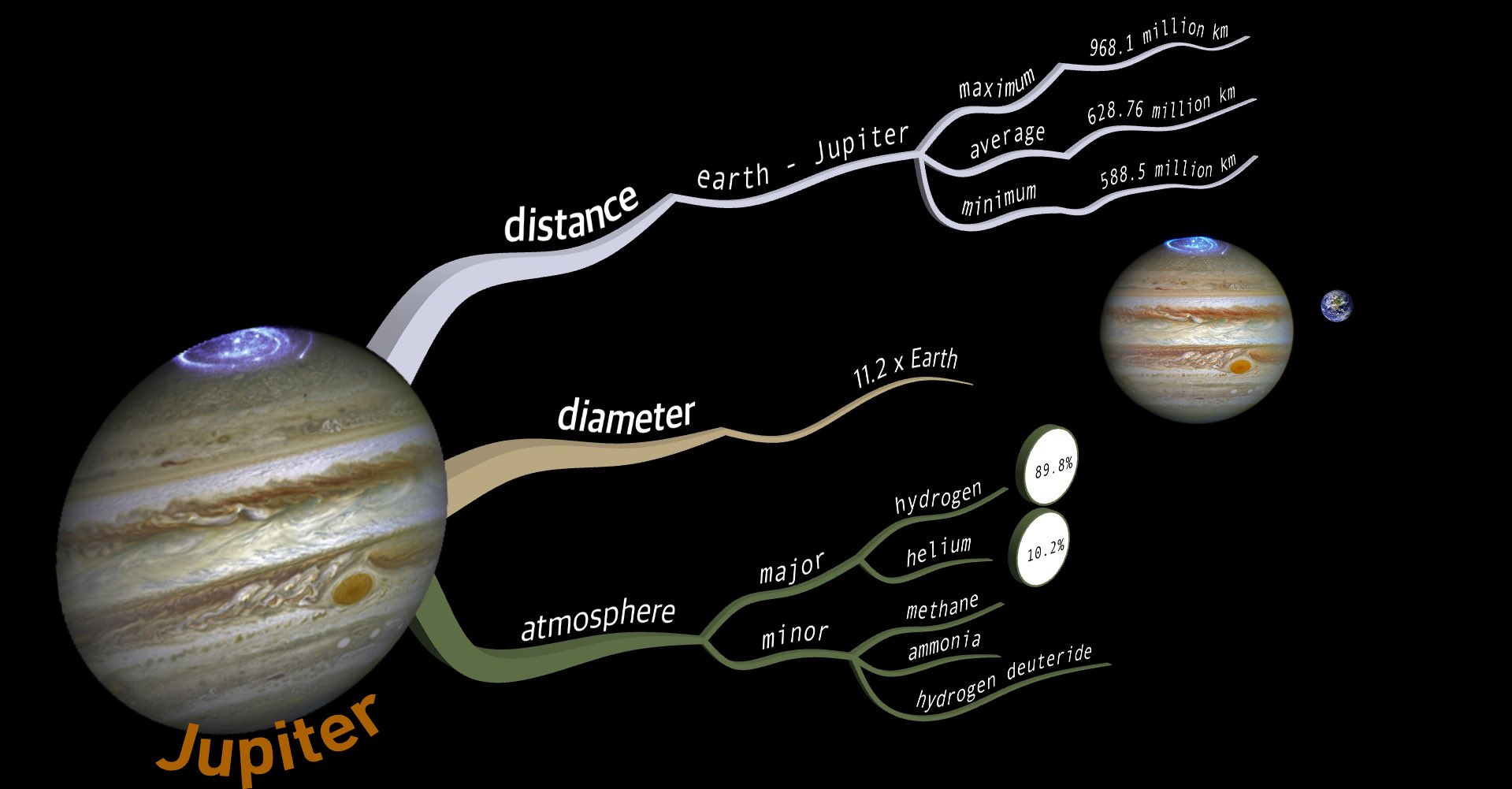 Jupiter comes fifth in the line of planets in order from the Sun and is the biggest planet in the entire solar system. This planet is named after the Roman God of the same name and is a gas giant composed primarily of Hydrogen.

2. The Hottest Planet in Solar System 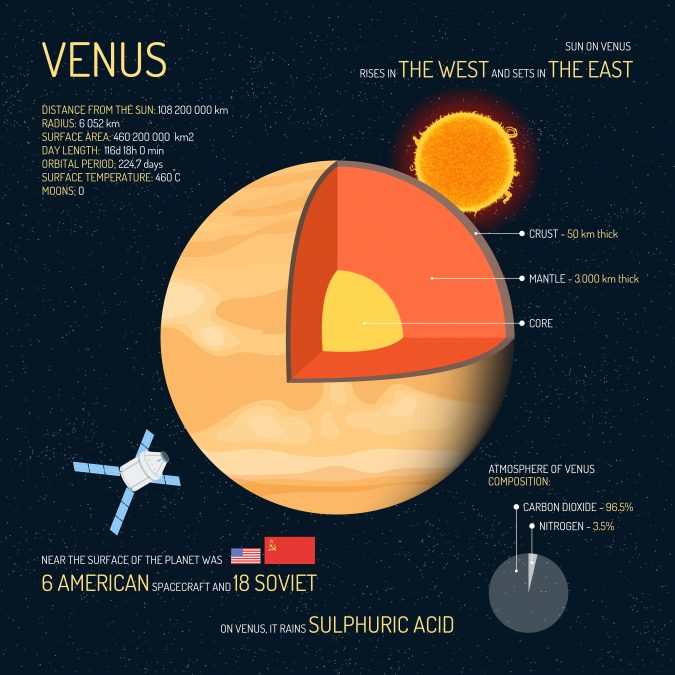 Venus, that’s second in line from the sun, is the hottest planet in Solar System with a consistent temperature of 462 degrees Celsius that’s the same in every part of the planet. It is also one of the brightest galactic objects visible from the Earth. That’s why it is named after the Goddess of Beauty in Roman Mythology, inspired by its luster. Venus is a terrestrial planet and is often called the “sister planet of Earth” due to the similarities of size and mass, and the proximity to the Sun. It is one of the two planets in the solar system that does not have a natural satellite, the other one being Mercury.

3. Planets in Order From The Sun

The order of the planets is classified by the orbital distance that each planet have from the Sun.

"My Very Educated Mother Just Served Us Nine Pizzas" is one the many Planetary Memorics endorsed by clever tutors to help pupils  remember the planets in order from the Sun. The memorics vary depending on the 8 planet or 9 planet order, and now with the potential of more planets to join the club, there should be more to follow along with the hand exercises to memorise this classification. But unlike most perceptions, this order is not linear, but circular. Therefore to comprehend the entire picture, knowing the distance is not enough. You also need to grasp the placement of the planets. 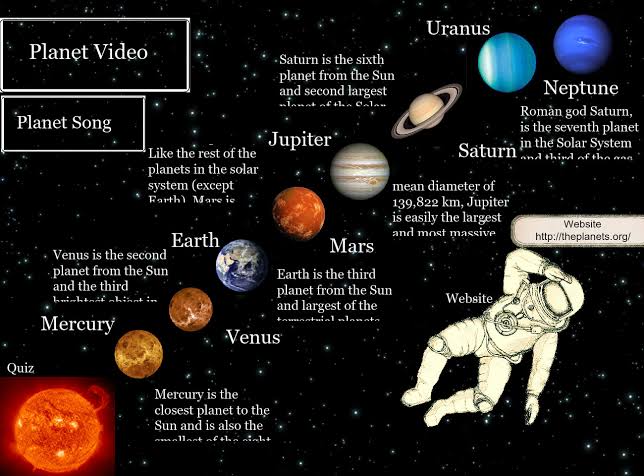 It is because of the linear course of the placement of the planets that it often seems that Venus may be the closest planet to Earth since it comes between Mercury and Earth while orbiting the Sun. But in truth, it is actually Mercury that is the nearest planet to Earth, based on distance measured in the astronomical unit. In fact, Mercury is nearest to not only Earth but all the other seven planets. It is the smallest inferior planet and is also among the hottest planets, comprised primarily of Hydrogen and Helium. It is named after the Roman deity Mercury, who is the messenger of Gods.

5.  Farthest Planet From The Sun

Long story short, Neptune is the farthest planet from the Sun. But it is now contested by Pluto since it was promoted from being a dwarf planet and to the smallest planet in the solar system. it is the #8 planet in the order and is the third-largest planet that has the highest density, primarily composed of Hydrogen and Helium, with dense masses of Methane present in its atmosphere, making it appear blue.

What Can We Benefit from Mind Maps?

Mind Maps help learners and researchers to streamline hovering information into concise data. It is a practical method to visualize realms that are far out of sight. The best benefits of Mind Mapping are:

Are you are a teacher, student, researcher, or creator who working on graphic projects revolving around the Solar System? You can boost your work with the use of high-quality solar system templates and drawing tools featured in the EdrawMind mind map diagramming software.

The tool is simple and can take away hours of work time from your project. All it takes for you is to download the software, or you can log in to the Edraw portal to access the web version of the same. And what’s more? You can use the basic suite free of cost. If you want to leverage the advanced options, then all it takes is the one-time purchase of the suite that you can unlimited for a lifetime.