Leading a modern lifestyle full of facilities may look fascinating, but it is directly as well as indirectly negatively impacting the environment. The use of these facilities is known to throw more negative consequences rather than positive ones. And, global warming, or you can say, climate change in a more drastic term is one of the significant world concerns. In this article, we will define the global warming mind map and its related conditions. 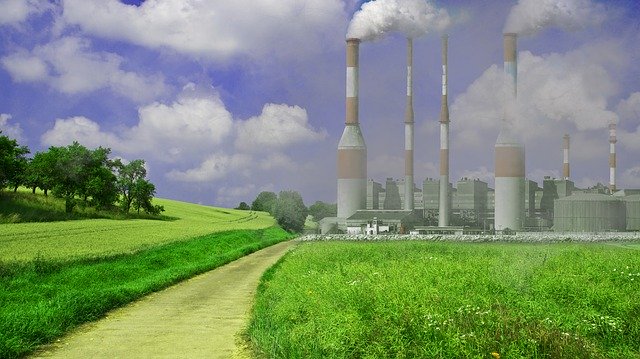 What is Global Warming?

Thus, the rise in sea levels, melting of glaciers, dying of forests, and scrambling wildlife are all keeping up the pace to contribute to the significant problem of global warming. Its primary cause is through the effect of greenhouse gases, which directly melts the glaciers and raises sea levels. The special greenhouse gases such as methane and carbon-dioxide prevent the earth's heating temperature from getting up in the atmosphere and thus warms up the whole globe to alarming levels.

Climate Change and extreme weather conditions are some of the disturbing influences of global warming on people. On the other hand, the globe is also experiencing sea acidification as a result of this issue.

To understand the concept in a more informed manner, we listed seven climate change mind maps below. Furthermore, the mind map helps you grab the global warming ideas over the online tool.

Given above is an example of global warming mind map causes. Climate change is known as the dangerous cause, among others. With the frequent causes, the earth is experiencing heavy rainfall, sudden droughts, and powerful hurricanes. The harsh heat waves on the globe have also caused tons of deaths around the nation in recent years.

Along with greenhouse effects, global warming causes drastic changes in the regional climate. These effects can be extremely harmful to society. Less developed and low-latitude areas are at the most risk of having negative impacts. Well, you should find out specific ways to reduce the effect such as saying no cutting of trees, reducing the use of fridges, washing machines, etc. Check out the next mind map example for solutions to global warming. 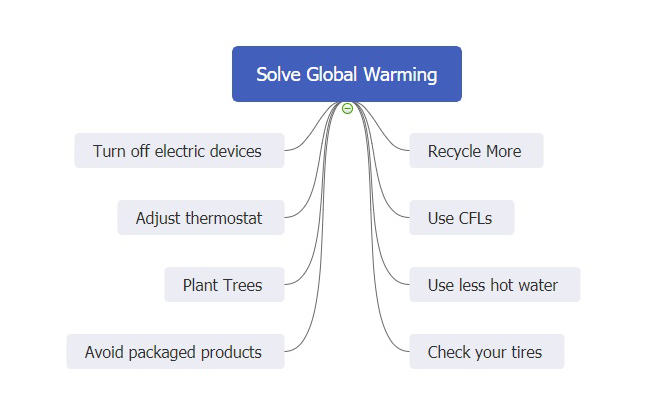 There are many ways to address global warming issues. They can help you cope up with the problem and explain in one word on how you can solve the whole matter. As global warming is getting worse day by day, nations around the world are researching advanced ways to solve the problem. In the end, change only occurs when individuals take it as their responsibility.

Researches show that climate change will show drastic change over the next century and beyond. Rising sea levels, changes in weather conditions, and other factors are also not that great for growing crops. Thus, climate change is one of the pressing concerns associated with global warming. Researchers from Norway and Switzerland have detected that climate is changing every day like a fingerprint. 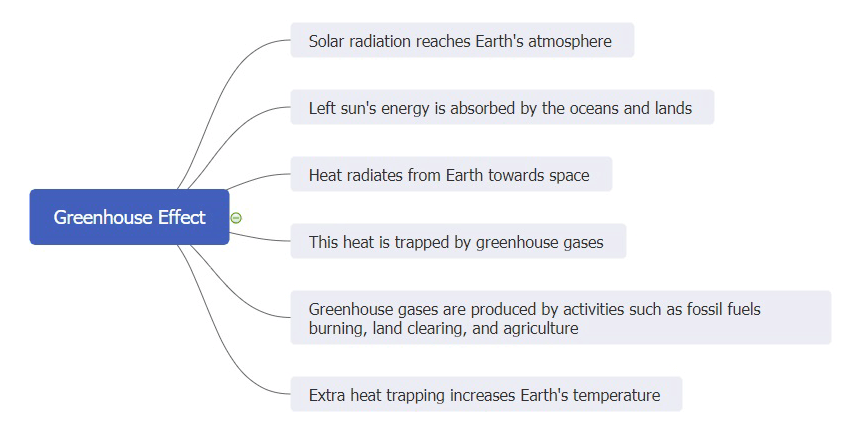 The process by which greenhouse gases increase the Earth's temperature follows specific steps as listed in the above global warming mind map example. In total, six steps are leading the way to increase the temperature with activities such as burning fossil fuels, land clearing, and increased use of vehicles. The way heat first radiates into the Earth and then radiates back to space is disturbed by greenhouse gases as they trap that extra heat in the passage.

The cause of rising sea levels is affected by three main factors. These are namely thermal expansion, melting glaciers, and loss of Antarctica and Greenland’s ice sheets. The significant contribution of a thermal expansion goes to the factor that warm oceans are getting more space. Next, melting glaciers are due to an imbalance between ocean evaporation and runoff. Scientists believe that the loss of ice sheets greatly lubricates the ice streams and cause them to move more speedily into the sea.

El Nino is known as the climatic phenomenon, which occurs every two to seven years. The Tropical Pacific Ocean is the primary action theatre. The way El Nino redistributes the heat makes a step to cause mini global warming between two El Nino events. Its recent appearance was in December 2018.

How to Create a Global Warming Mind Map with EdrawMind?

For making all these global warming mind map examples, we have made use of the mind mapping tool -EdrawMind. It is available for free and in another case, you can also purchase their membership to enjoy advanced feature.

To make one global warming or climate change mind map for your project, you need to keep in mind the following points.

We discussed global warming and also stated how easy it is to indicate complicated matters over the template. Just find out the specific information you need to remember and transfer it to the global warming mind map.