Fyodor Dostoevsky was a Russian by ethnicity and was known as a Russian novelist.
Twitter Share Copy
Link copied! 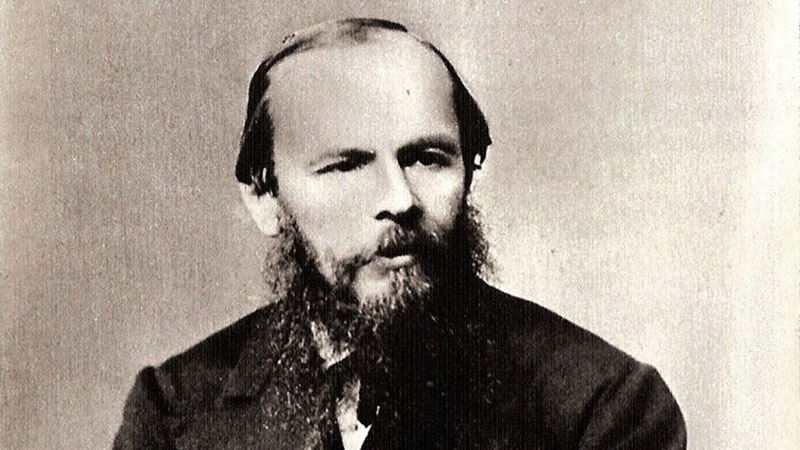 There is no way one can discuss novels without taking the name of Fyodor Dostoevsky. He was one of those novelists who had presented one of the best works in the literature’s novel Department. Fyodor Dostoevsky was a Russian by ethnicity and was known as a Russian novelist. He also participated heavily in writing short stories and books as well. His versatile career also included writing plays. He had also given a lot of preference to philosophy as he was also considered a philosopher.

Dostoevsky had written so many novels on finding the purpose of life and the philosophy of living a half-life. His works specifically concentrated on the philosophical aspects of human nature. The relatable prospect of his work made him a household name in no time. The majority of the population started to engage in the character he put out.

Fyodor Dostoevsky was a Russian by ethnicity as he was born in the city called Moscow, which was located in Russia. Fyodor Dostoevsky was born in 1821 November. Fyodor Dostoevsky belonged to a prosperous and comfortable background as his father was a doctor. He had been interested in philosophy and religion due to his strict, religiously oriented family, as his parents were highly focused on spirituality and philosophy. Fyodor Dostoevsky indulged in good books and well-written content at a very young age as his father and mother both liked to engage in written content and literature. He spent his initial years of education at home because his parents were his first teachers, then he got admitted to a well perceived private school for education. However, after 15, he suffered from personal issues as his mother was no longer in this world, and his father was involved in a crime that led to his fathers’ death.

Later on, when he turned eighteen, he continued his studies in the Petersburg region of Russia. He was brought up and fully equipped to work as an engineer in the military forces; however, he did not fancy that idea and wanted something different. That something different was his love for literature that he followed in the coming two years after he finished school. He became entirely focused on literature and writing pieces with a mixture of both literature and philosophy altogether. His early years defined him as a soul full of talent and joy. However, if you see his old works, you can also find mental illness and salad baselines in his works.

Fyodor Dostoevsky started easy as his early writing’s main focus was fictional stories of people suffering from poverty and misery. The first novel he published was called Poor Folk, released in the market in 1843. The plot revolved around the main character, who lived through poverty and the government’s strict rules. The novel became popular in no time, so the second novel was published in 1846, known as The Double. However, the other work did not do so well, but The Double, fortunately, became one of the very renowned names of literature. Many people think that The Double was too modernized and open for the people in that era. After that, Fyodor Dostoevsky smooth sailing as the readers warmly welcomed all the short stories and books. All the stories he wrote were very different, so people loved them and anticipated them whenever he wrote one.

He lived a quiet moderate life for a few coming years; however, his life took a turn When he was added to a group against the government. He joined the group in 1847. His life took a turn when he was arrested with a few members of his circle. A lot of people had the misconception that he got the death penalty and died. However, it was not the case as he got four years in prison and an additional four to six years to serve the Serbia army.

The other turning points of his life were when he returned from the army and realized his spouse’s descending health, which led to one of his best works known as the Memoirs from the House of the Dead. Later on, he also referred to his problem in his future results, such as Notes from Underground. He started to describe life’s law and how various phenomena and situations lead human life to different prospects in his works. His powerful stories were based on self-love and finding happiness in life.

His work also defined the law of stability and dependence one had on their own life as humans could make and destroy their own life with their own hands in no time. The content he published was very relatable to most readers; hence it became the sole reason for his success. 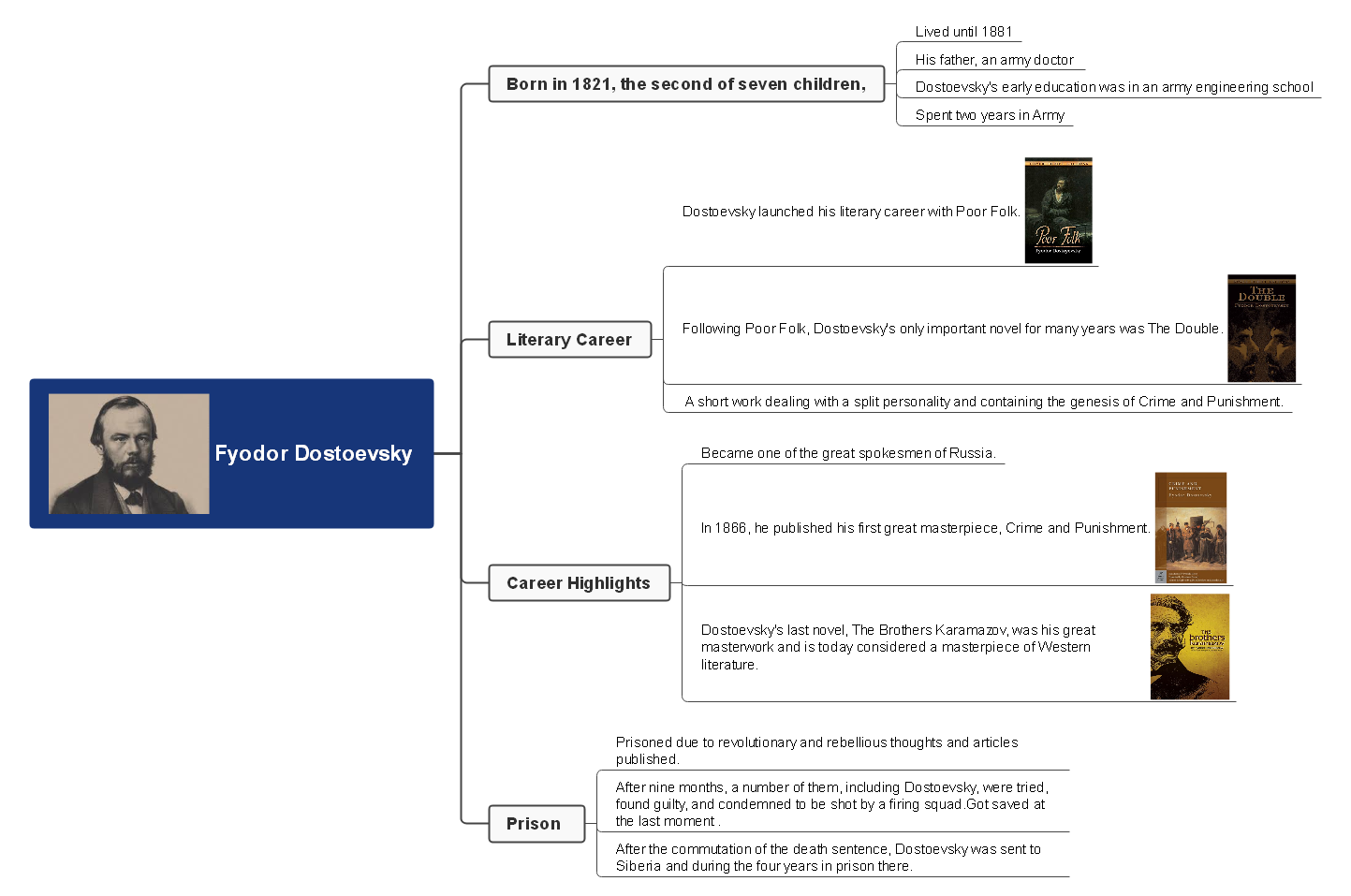 One of Dostoevsky’s best works was Crime and Punishment, which he published after his first wife’s demise when he got married again to a woman named Anna Grigorieva. After his spouse died in 1864, his content became alive and cheerful. The art of crime had a very indulging yet complex storyline based upon crime and suspense.

There are a lot of famous books by Dostoevsky such as The Double in 1846, White nights in 1848, Uncle's Dream in 1859, Humiliated and Insulted in 1861, Notes from Underground in 1864, The Gambler in 1866, The Eternal Husband in 1870, Demons in 1872, A Writer's Diary in 1870, The Raw Youth in 1875, A Gentle Creature in 1876, The Dream of a Ridiculous Man in 1877, The Grand Inquisitor in 1880 and many others. In addition to the novel mentioned above, The Devil or The Possessed is also very popular and adored by readers worldwide. The Devil was published in 1871 till the year 1873 continuously. The main plot revolved around mister Govorov’s character, who was also the narrator who described various events in his life.

Lastly, other works such as The Brothers Karamazov, which was published in 1879, got awards and recognition in the literary community, and Psychologist Sigmund Freud, which was published in 1856 till the year 1939. The story revolved around a very mediocre family that went around the journey of dispute and family drama. The story started from a minor dispute for inheritance from Fyodor’s three sons: a greedy man himself. The whole matter escalated as all the children began to decade the same and got to the point of Zossimos death following by the murder of Fyodor and who and how he was killed. The book tells the story of how a simple family went from an everyday conversation to court hearings. The story ended with a life-changing situation as Alyosha followed his steps and became a teacher. 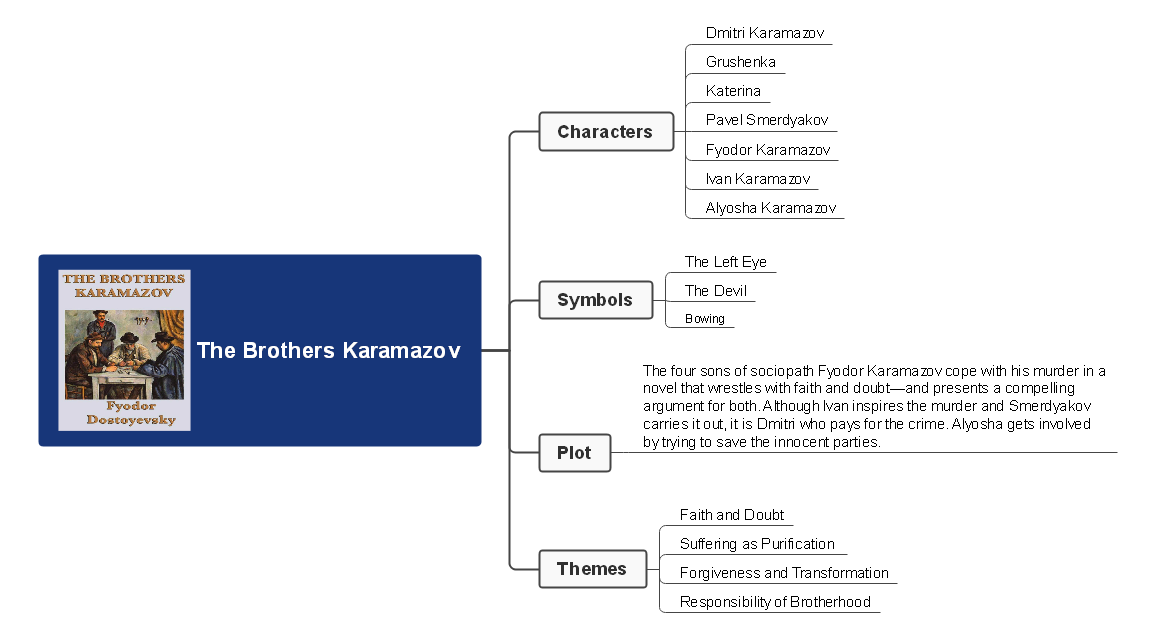 In addition to other fields of work he also contributed a lot to philosophy as well. Most of his philosophy on humanism and some of his neural philosophical prospects and concepts are still valid in the literature community. He was not a fan of the concepts of egoism as well as the theories about human creation and God but had keen interests in other parts of neutral philosophy such as kindness and concepts of love and empathy. The main philosophies he attended were Christianity and utopian socialism and the explanation of enduring hardships as humans. All of his previous works went on these concepts as well.

After publishing various successful novels and plays, he decided to take care of his health and family. However, he still published small short stories for the readers. Due to the accidents at his early age, he fell ill and fought for almost four years before. After his father’s death, Dostoevsky was connected with rebellious activities and was also seen with radical groups, which is why he eventually got execution orders and died in 1849 in November.