Make your work an easy task by prioritizing things and using the MoSCoW matric template.
Use this template Explore more templates
#Brainstorming

Make your work an easy task by prioritizing things and using the MoSCoW matric template.
USE THIS TEMPLATE 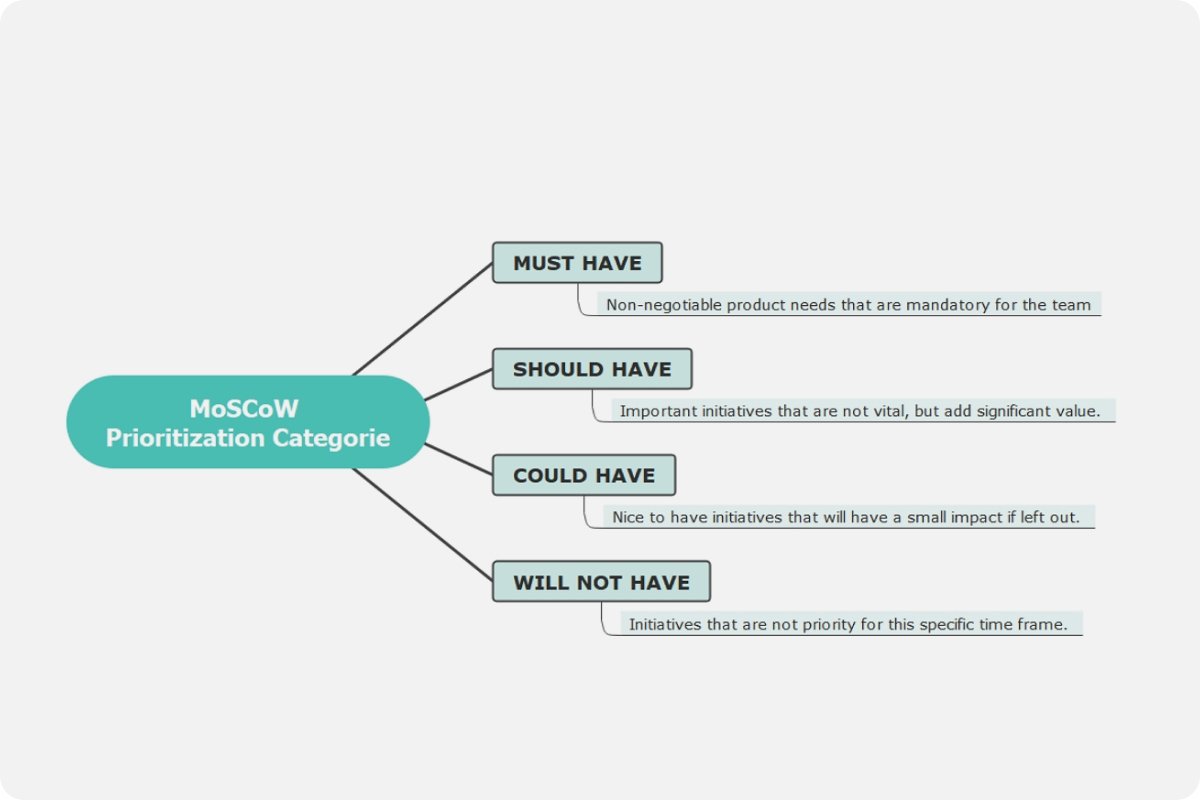 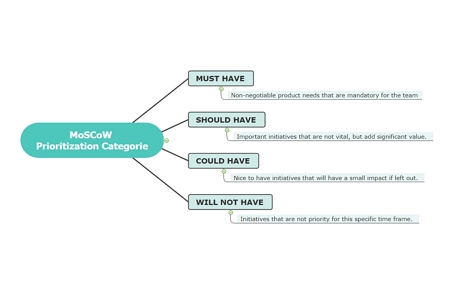 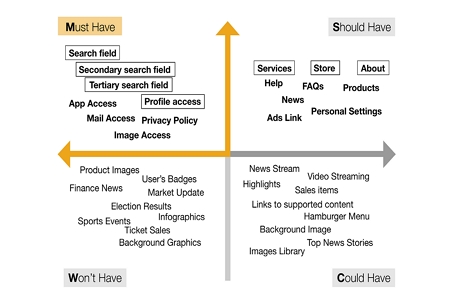 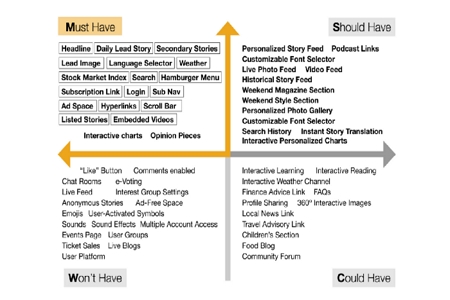 MoSCoW Matrix Template example 3
When a group is engaged, ranking things in order of importance is a difficult task. If you've ever organized a birthday bash with a bunch of friends, you know how one person is interested in spending all of the money on decor, while another believes the cake should take precedence, and still, another believes your cash should go into finding the right venue.
Consider how tough it is to get a team to agree on the proper priority for efforts in a release. This is where the MoSCoW priority system comes into play.

Why is MoSCoW Important?

The MoSCoW approach is beneficial for developing a solid product for various reasons. First, it aids in creating a project timetable by deciding what tasks must be accomplished first. Everyone understands the most critical elements, which gives the project a feeling of order.
Second, the MoSCoW method is good for establishing project goals for both the team and the stakeholders. It offers investors a decent understanding of what to expect from the project as well as an estimate of how much each component will cost.
Third, including MoSCoW into your work approach will aid in keeping the project's vision on track. It's normal for your staff to stray beyond the project's needs and constraints while brainstorming with coworkers, igniting your imagination, and striving to push the boundaries.
Although this is great for the concept stage, it's not great when working on a product. Everyone has a clear checklist of what they're doing thanks to MoSCoW. in contrast to a hazy and multidimensional view.

To identify the relevance of projects, the MoSCoW prioritizing categories uses a simple set of criteria. The MoSCoW criteria assist teams in prioritizing in a planned and logical manner. This technique reduces squandered time, squabbles, and misinformation. It also removes as much prejudice as possible from the process, allowing everyone to see the needs objectively.
The four categories of priority needs are as follows.
1. Must Have
These define the MUST of criteria that the project must meet. Some of the following can be used to define them. There's no purpose in delivering on time if this isn't done; if it isn't done, there's no value in deploying the solution on time. Consider the following scenario: 'What happens if this condition is not met?' If the answer is 'cancel the project - there is no use in constructing a solution that doesn't fulfil this demand,' then the requirement is a Must-Have.
2. Should Have
The following are some examples of requirements: Examining the degree of suffering caused by the need not being satisfied, assessed in terms of company value or numbers of individuals affected, is one approach to distinguish a Should Have demand from a Could Have requirement.
3. Could Have
The criteria are defined as follows: Because they would only be supplied in their whole in the best-case scenario, they are the needs that offer the largest pool of contingency. When an issue arises and the deadline is in jeopardy, one or both of the Could haves offer the initial option for what should be cut from the schedule.
4. Won't Have This Time
This is a list of needs that the project team has decided will not be fulfilled (as part of this timeframe). They're listed in the Prioritized Requirements List, which helps to define the project plan. This prevents them from being reintroduced unofficially at a later period.
Won't Haves may be highly effective in keeping the attention on the more crucial Could Haves, Should Haves, and especially Must-Haves at this time.

The following example is the MoSCoW template for all the four main MoSCoW prioritization categories. These all categories are defined in a concise and summarized way to make the learners understand them easily. These 4 categories are the main requirements of the MoSCoW template before any project starts. This is a great way to prioritize what you should start at the first in the project. 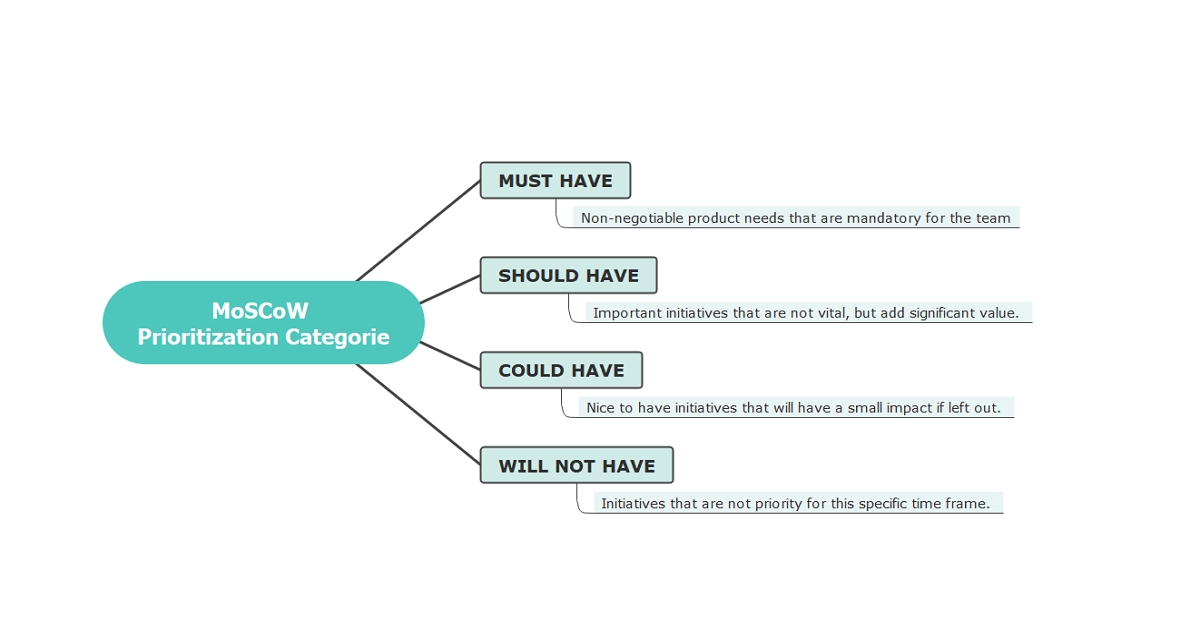 This is the MoSCoW analysis of a google page, it is always important to have all of your 4 categories already planned. Using it in the initial design phase will help your overcome many errors and difficulties. You can always come back and redesign all of these four categories according to your priority. 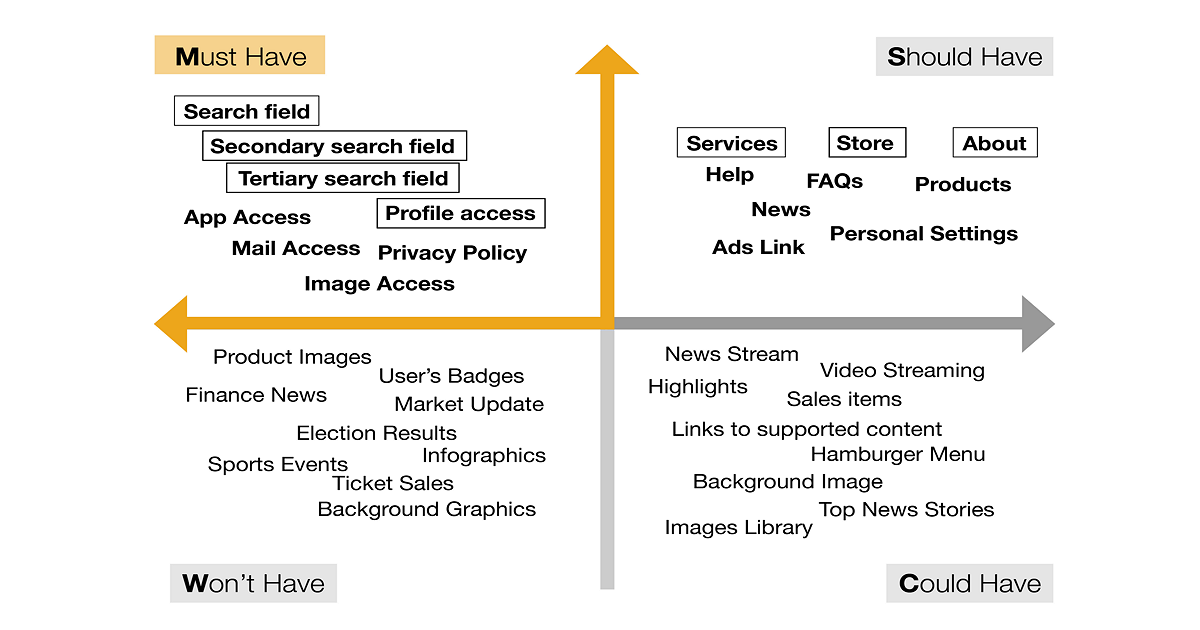 The main page of the New York Times, one of the most extensive newspapers in the United States, is represented by this MoSCoW. Starting with the Must-Have Features section, we can see how complex this website must be to give comprehensive news coverage. The other three quadrants describe how this webpage could be able to provide further services. 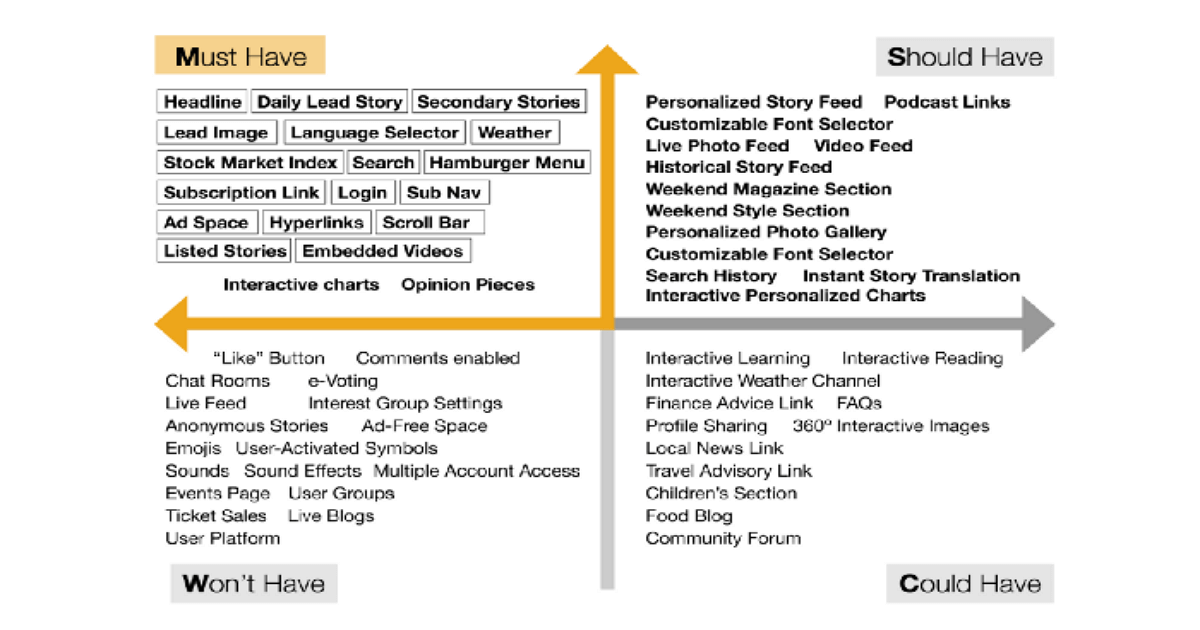 EdrawMind is a full-featured collaborative mind mapping and brainstorming tool. It is convenient and helpful for you to use EdrawMind to sort out your thoughts, visualize ideas, take notes, plan projects and more importantly, find solutions to problems.
Users are allowed to insert different kinds of objects into topics and mind maps in EdrawMind, including relationship line, boundary, callout, summary, mark, clip art, picture, hyperlink, attachment, note, comment, and tag. EdrawMind offers you a simple way to create mind maps on Windows, macOS, and Linux. Download the desktop version and try the free online version now! 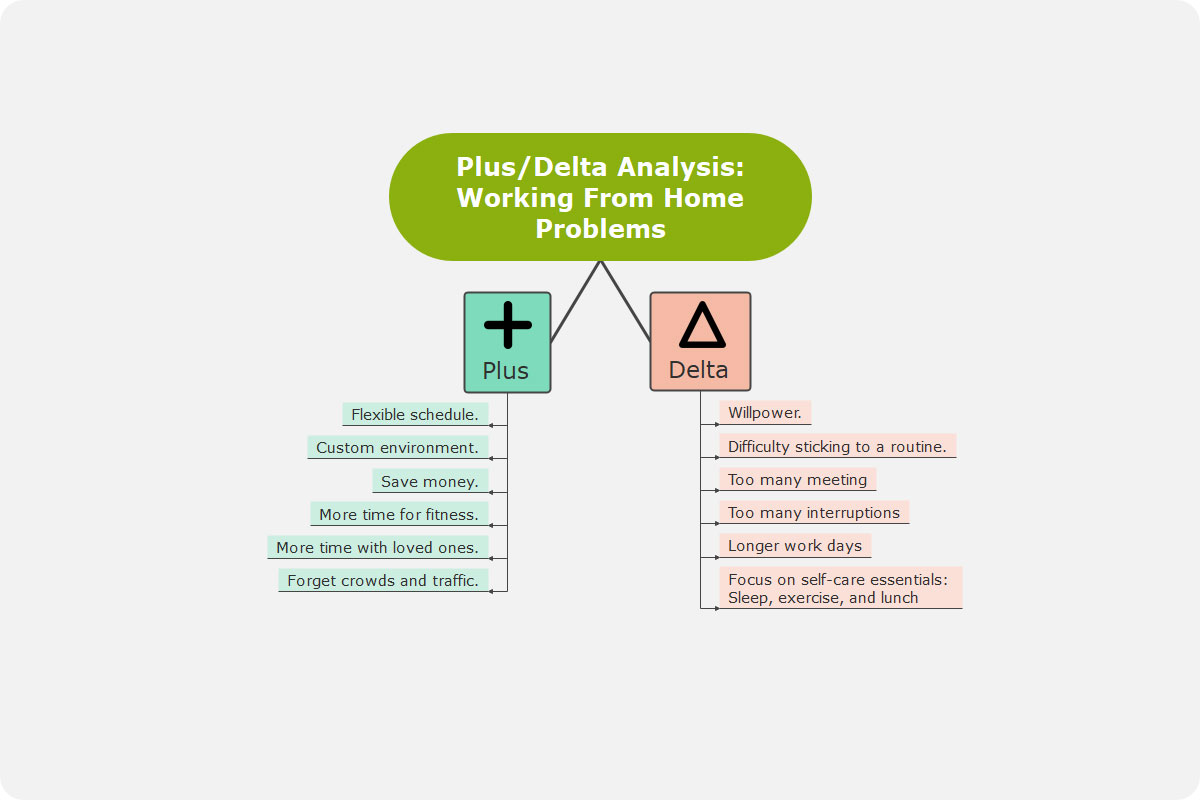 Plus Delta Template
The Plus Delta template allows you to sort feedback and classify it into the good ones and those that suggest improvements for your next projects.
View this template >> 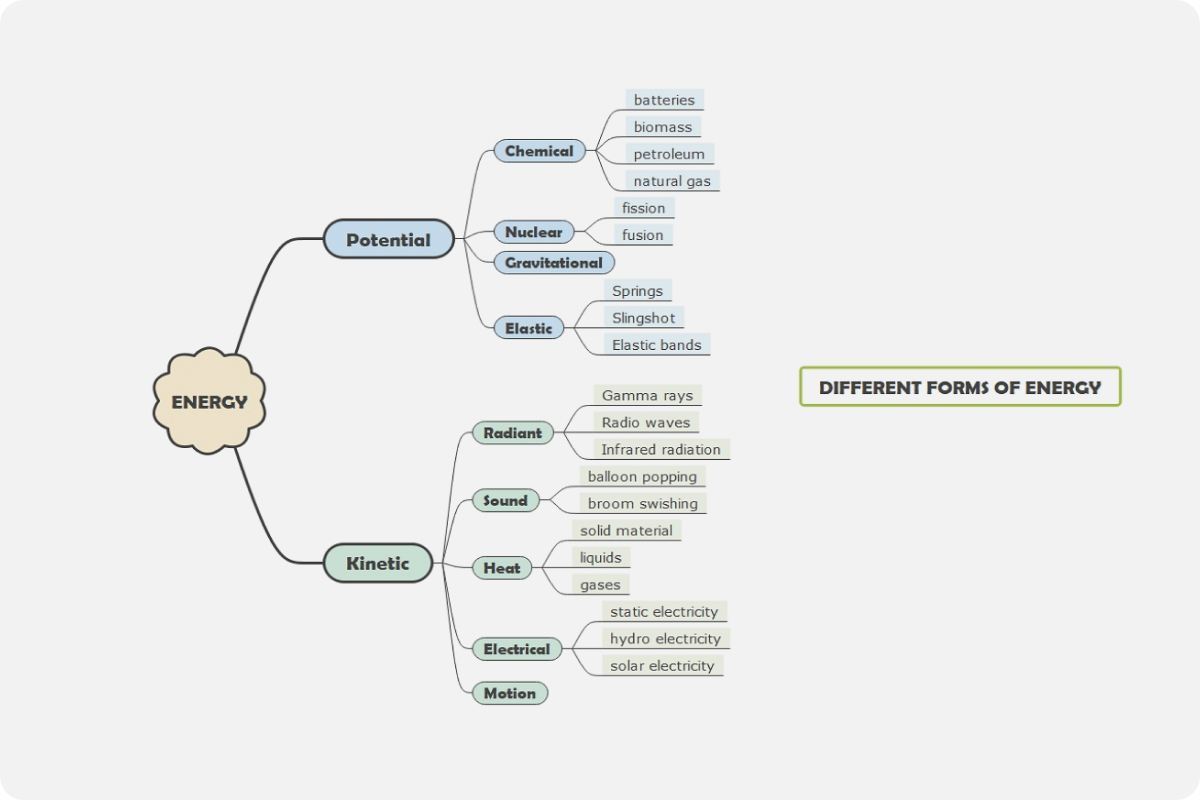 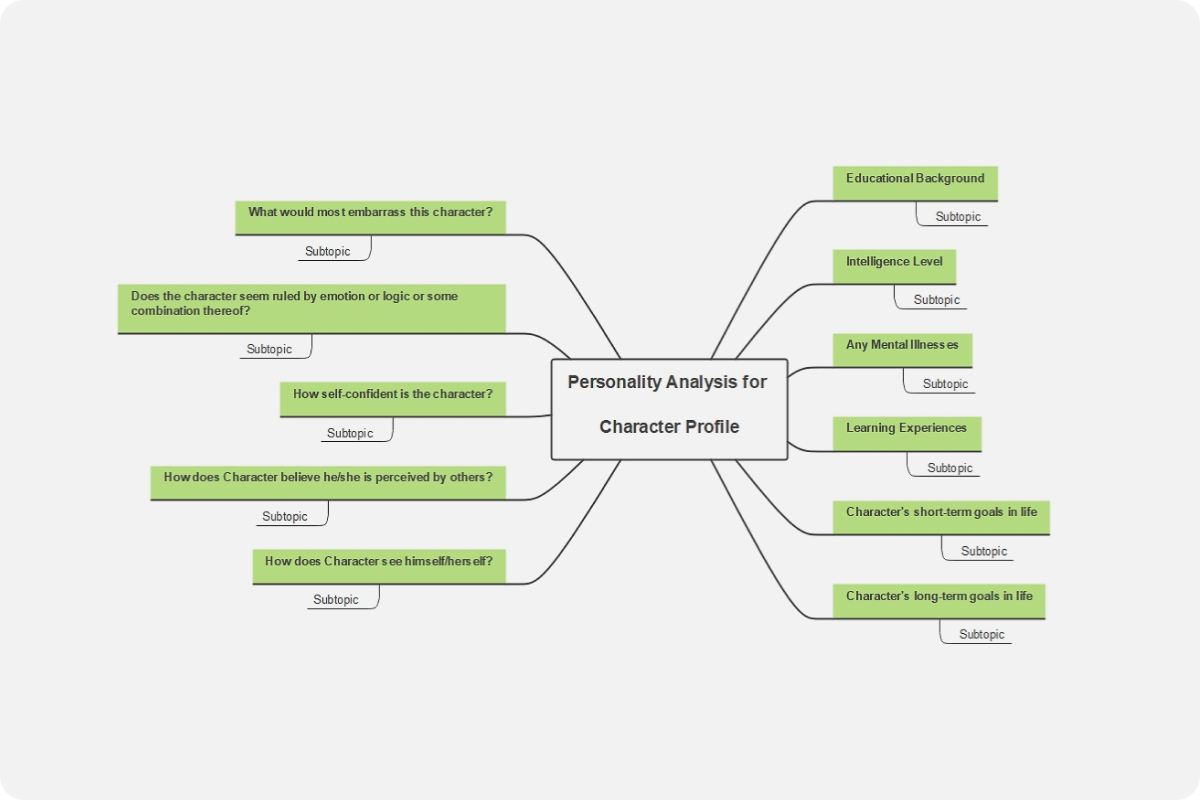 Character Profile Template
This is the perfect template for creating fictitious characters.
View this template >> 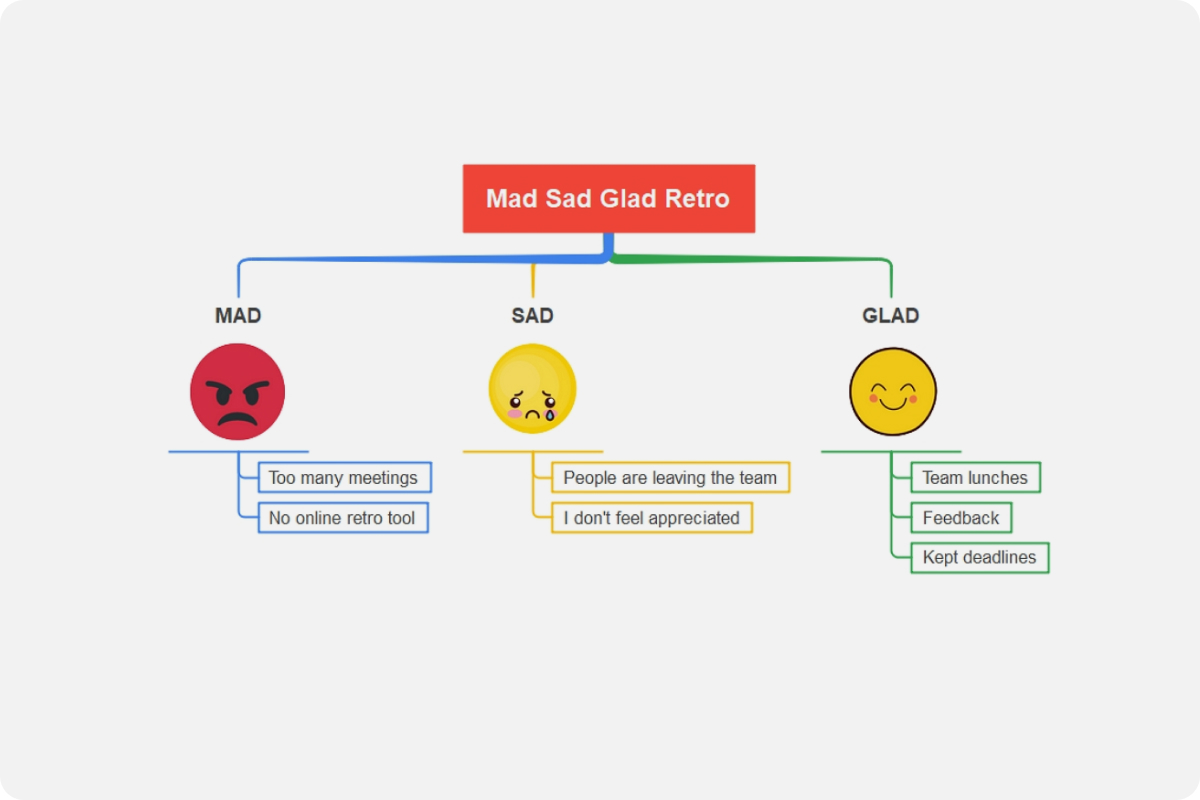 What So What Now What Template
Categorize your team’s reflections with the what, so what, what now template, allowing you to identify gaps in projects and understand one’s perspectives.
View this template >>